In chronological order, most recent at top

For those that are new to the Campaign and want to understand the history of the cruise terminal debate, the planning parameters and previous reviews into the various options for a cruise terminal (all of which recommended a shared facility at Garden Island) it is worth taking the time to read this literature review (in particular the final part that has submissions from ALL the different stakeholders agreeing that sharing Garden Island is the best option).

This is the first public document regarding this proposal to be published by the NSW Government. The document has been placed in letterboxes throughout the La Perouse, Phillip Bay and Little Bay neighbourhoods.

Click here for a PDF version of the document. 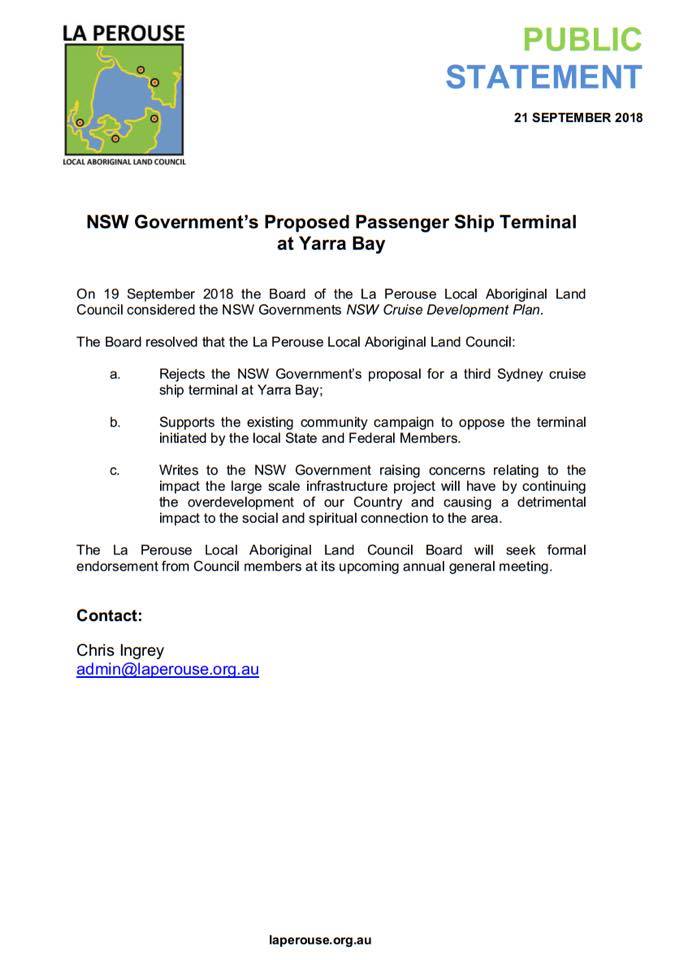 Ordinary Council Meeting – Council of the City of Randwick

“[The plan:] will guide the NSW Government’s ongoing investment in our ports and cruise industry. This includes working with business to address the approaching capacity and infrastructure constraints in Sydney Harbour and developing regional cruise infrastructure, including new cruise destinations along the NSW coast.”

The NSW Government will prepare a strategic business case to assess the viability of two potential sites: Molineaux Point and Yarra Bay.

The lead agencies for this action are Port Authority of NSW and NSW Treasury. Key partner agencies are Department of Industry and Transport for NSW. It is therefore curious that letters and queries regarding the Mega Cruise Ship Terminal are being directed to Melinda Pavey, Minister for Roads, Maritime and Freight, as her agency is neither a lead agency or a key partner.

The NSW Government will work with
the industry and other stakeholders to: … assess the viability of a third Sydney cruise ship terminal by preparing a strategic business case that evaluates two of the sites recommended by the Reference Group: Molineaux Point and Yarra Bay.

The Cruise Industry Reference Group (chaired by Peter Collins) conducted a preliminary assessment of 14 potential sites for a possible third cruise terminal in Sydney and reported to the NSW Government in October 2017.

Some detail concerning the Molineaux Point and Yarra Bay options is provided on p 16.

C4 – The NSW Government (as an alternative to development of a new long-term cruise terminal in Sydney Harbour) develop a cruise ship terminal and wharf at Yarra Bay in consultation with Indigenous and local community representatives and in accordance with environmental safeguards.
C4.1 – To ensure the availability of a berth and terminal capable of accommodating Large and Mega cruise ships in Sydney as soon as possible, preliminary planning studies for such a development be conducted concurrently with the considerations of options one and two.
E1 – Subject to the technical and operational feasibility of the options being determined, it is recommended the NSW Government explore with the cruise industry and private sector funding models to deliver each infrastructure solution, including potentially on a ‘Build, Own, Operate’ (model).

The following diagram illustrates the zone of destruction of a Mega Cruise Ship Terminal in Yarra Bay. All of Yarra Bay is affected as well as parkland behind the beach, and there are major impacts on neighbouring Frenchmans Bay and La Perouse Point.

During the second half of 2018, when the Mega Cruise Ship Terminal proposal became public, Channel 9 News prepared a graphic to indicate what each of the potential Port Botany sites might look like. The ships are not drawn to scale (they would be smaller than they are portrayed here) and the locations of the wharves and the berthing positions are speculative.

Posts on our blog